Walk Through Fire, by Kristen Ashley 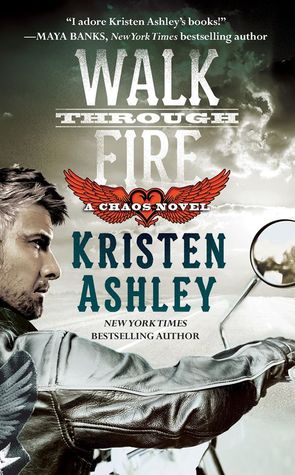 Rec’d an ARC from Net Gallery for an honest review:

Millicent Ann Cross goes to a high school graduation party meets a biker name, Logan Judd, love at first site. They date for a short time and move in together making plans for their future. They both want the same things, a loving home, lots of family and friends, and children. Millie works hard in school trying to finish college in under four years, and Logan is working for Chaos, a motorcycle club. When Millie reaches her goal graduating from college, she is one to her next goal, having a baby.

Twenty years later waiting in line at Chipotle, she hears a voice that she knows all too well, a man having a phone conversation. She looks up and there he is, Logan (High) Judd. She listens to his conversation; he is picking up his girls keeping them overnight and bringing them to school the next day. OMG, he has children, girls, and must be going through a divorce, he is moving back looking for a house for him and his girls.

Armed with this news, she knows now that she can come clean with him as to why she left him all those years ago. She will give him that as well, put an end to her suffering. Once she comes clean, she will be able to move on and get her life back, start living. Things don’t go quite as planned. High is looking for vengeance for the hurt she caused by breaking his heart and ending their relationship.

Walk Through Fire, is a must read, Kristen Ashley is marvelous in her writing abilities, from one character to next. Love her style of writing conversations between a biker and his old lady, conversations between brothers, and between the sisters who are Chaos, all hell just love her style of writing. If you are familiar with Kristen Ashley’s writing, you will notice some of the same characters from her other MC books. If you aren’t familiar with her books, I suggest you start with the Rock Chick Series, you will not be disappointed.