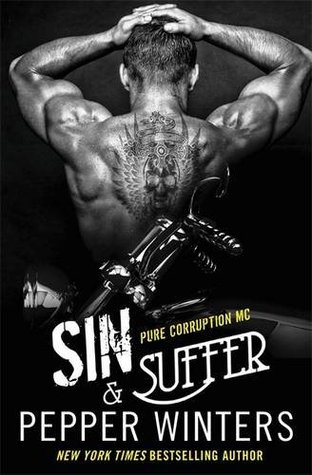 About SIN & SUFFER
“Some say the past is in the past. That vengeance will hurt both innocent and guilty. I never believed those lies. Once my lust for revenge is sated, I’ll say goodbye to hatred. I’ll find a new beginning.”

She came from a past Arthur “Kill” Killian never forgot. She made him sin and made him suffer. She tugged him from the shadows and showed him he wasn’t as dead as he thought. And with her resurrection came betrayal, deceit, and war.

But then they took her. Stole her. Imprisoned her.

Now Kill’s carefully laid plans for vengeance are complete. He craves action, retribution-the blood of his enemies. War has begun. War is all they’ll know until they’ve paid their penance. He will get her back-and rewrite their destiny . . .
Amazon: http://amzn.to/1Tm7TKI
B&N: http://bit.ly/1S9pqDv
iBooks: http://apple.co/1ZHuBOY
Kobo: http://bit.ly/1MfyF3l
Google Play: http://bit.ly/1Rl9GCh

ABOUT THE AUTHOR: Pepper Winters

Pepper Winters is a NYT and USA Today International Bestseller. She wears many roles. Some of them include writer, reader, sometimes wife. She loves dark, taboo stories that twist with your head. The more tortured the hero, the better, and she constantly thinks up ways to break and fix her characters. Oh, and sex… her books have sex.

Received an ARC for an honest review.

Sin & Suffer is the follow-up book to Ruin & Rule (Pure Corruption MC Series). Arthur Killian remembers everything that happened to him in the past, what his family did to him and what he did to protect himself. However, is his memory correct? Did someone interfere with his memory of a particular story that happened at Dagger Rose? On the other hand, Cleo Price’s memory was entirely wiped, amnesia. Until she was stolen again by Rubix, bits and pieces were coming through, and her memory of how things happened returned under high duress, she was no longer Sarah Jones.
We find out what happens to Kill & Cleo, Dagger Rose, Wallstreet, and Pure Corruption in Ms. Winters’ style. I can say it was well worth the wait!