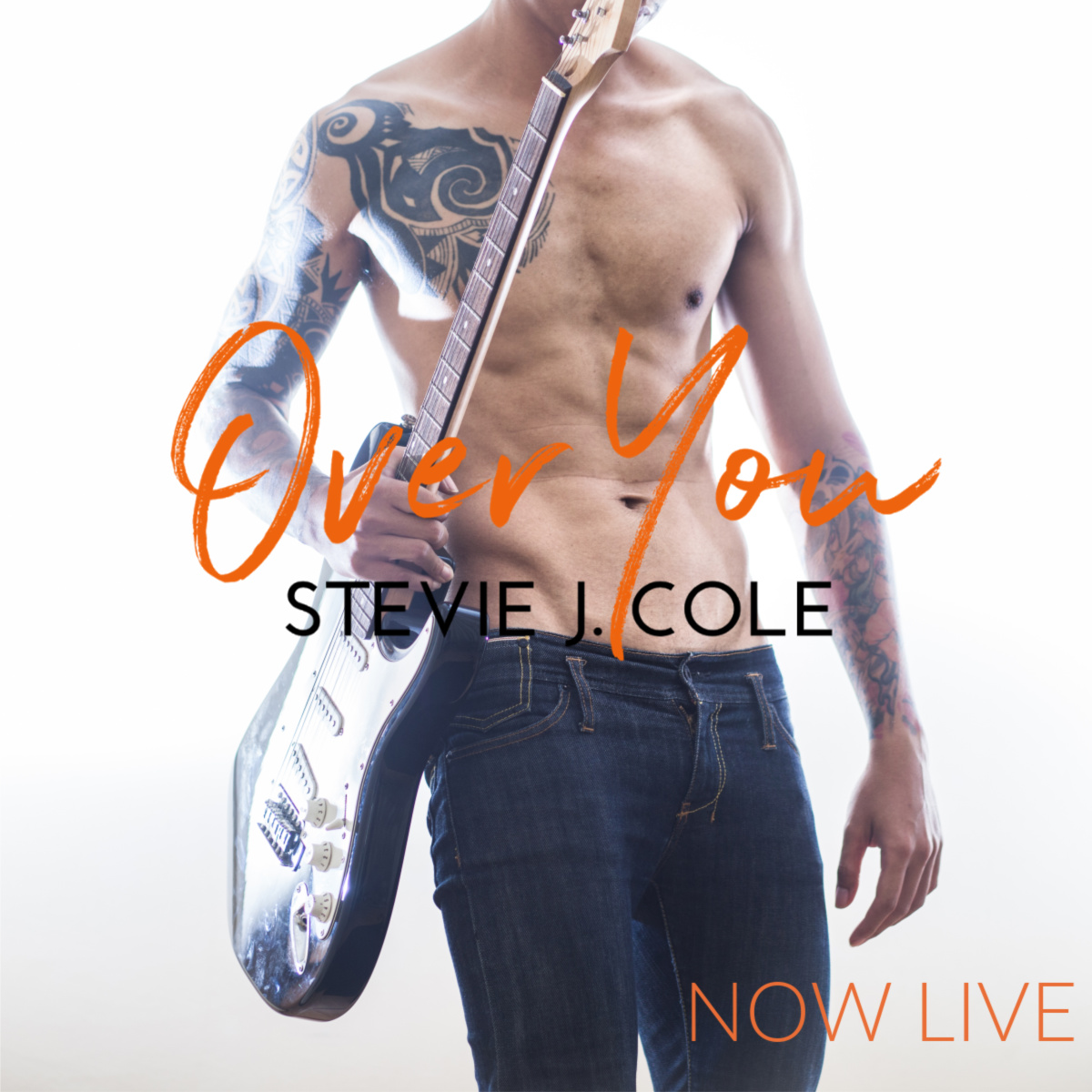 We’re celebrating the release of OVER YOU by Stevie J. Cole! Check out the excerpt and one-click today! 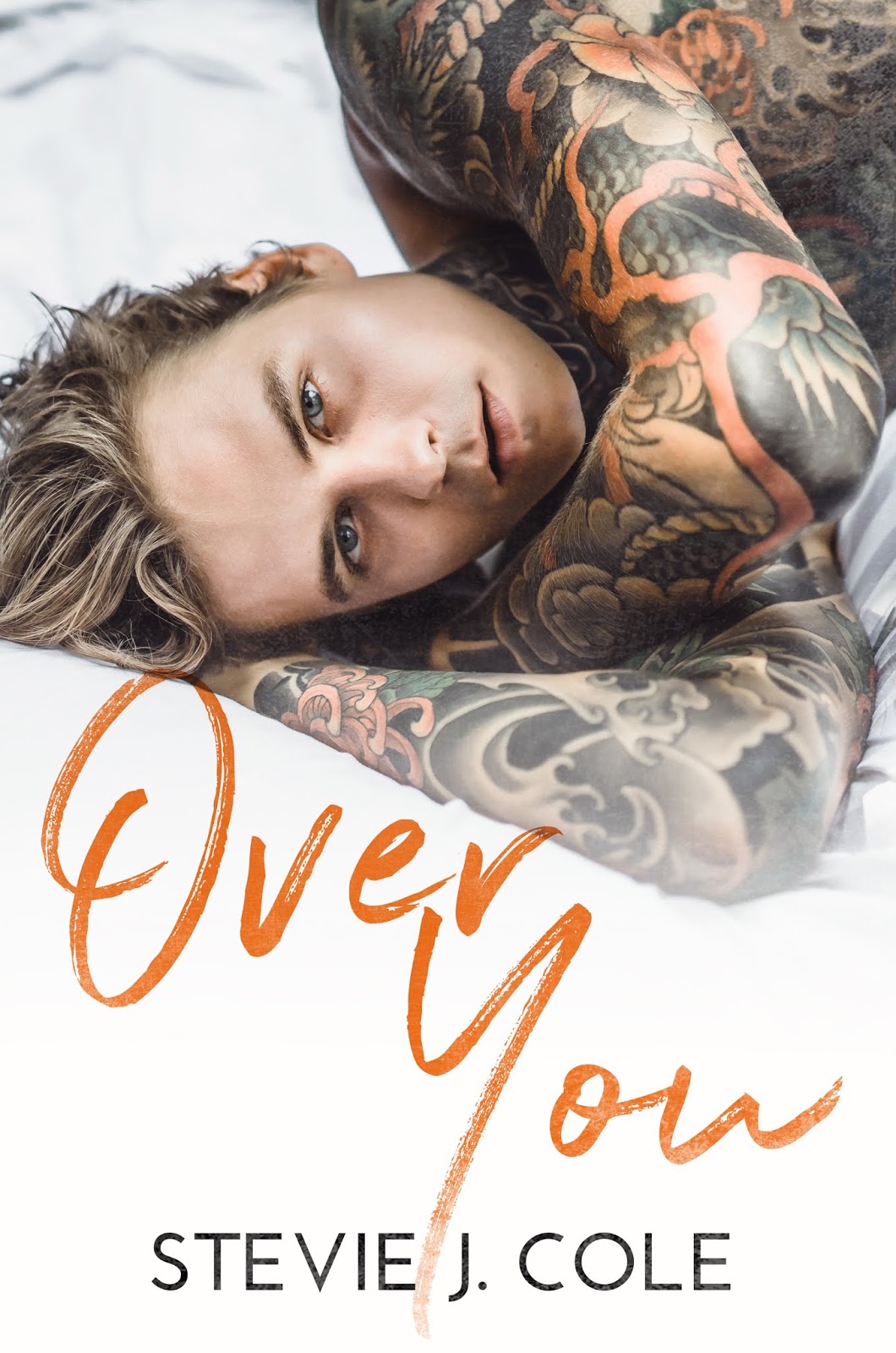 Rock star extraordinaire? Check.
Heâ€™s the guy most women would pay to have break their hearts.

Except me. I already know how hard it is to get over him.

Spencer made me believe in the notion of a soulmate at the age of seventeen. By twenty-three, he made me realize you could only truly hate someone you once loved.

Some people change your world. Some people let the world change them.

I hoped that next line of blow made the arrogant, womanizing, all-around-grade-A-asshole keel over.

Go ahead and judge me, but that was exactly what I wished for when mega-watt rock star Jag Steeleâ€”who also happened to be my rocker boyfriendâ€™s idolâ€”leaned over to get his next fix.

Maybe hoping for sudden death was harsh, but the past year in Hollywood had made me cruel. Plus, I knew someone at that party had Naloxone on them. . .so the fucker wouldnâ€™t die. It would just ruin his stupid, cockstar party.

At one point in life, I wouldnâ€™t have wished bad things on that conceited manwhore snorting rail after rail next to Spencer. But that version of Georgia Anne was long gone. Just like the guy who once loved her in a way that would have made Shakespeare jealous: unconditionally, undeniably, and without fault.

You see, that boy who used to wear second-hand clothes and write love notes to me on gum wrappers had been destroyed when he became the lead singer to the multiplatinum rock band, Midnite Kills.

And spat out in designer clothing.

The Spencer I fell in love with six years ago wouldnâ€™t have fought with me in the car on the way over, since he wouldnâ€™t have had cocaine hidden in his pocket. But that boy was lost somewhere between playing in bars and playing in arenas. While his eyes may have still been the same turbulent blue that reminded me of an ocean after a storm, the Spencer who loved me more than life itself was MIA, and for what?

A gunmetal Porsche, a slut-red Maserati, and a house in the hills.

To some that may have sounded like the jackpot, but what people on the outside didnâ€™t realize was: Hollywood came with a packaged side of bullshit that was nothing but a glorified death wish.

Sure, Spencer wore those tight, black Versace shirts with collars that dipped low enough to reveal his colorful chest tattoos like a second skin, but fame was a four-letter word, a virus that was slowly killing every part of me, every part of him. Each last piece of us.

â€œMan, itâ€™s my birthday. Come on. . .â€ Jag elbowed Spencer in the ribs, and, like a puppet, Spencer leaned over the table. A strand of dish-water blond hair fell from his messy bun when he took a hit.

Jagâ€™s gaze landed on me, his pupils blown wide. â€œItâ€™s my birthday, princess. Give him a break.â€

I patted Jagâ€™s hollowed cheek while Spencer sniffed the drug back. â€œGo fuck yourself.â€ I pushed off the couch.

â€œIâ€™m going to the bathroom.â€

That shouldnâ€™t have been enough to make him sit right back down beside the devil, but it was.

Music thumped through the sound system while I moved through the sea of models and rock stars, the actresses and socialites all in their clicks crowding Jagâ€™s expansive living room. I skirted around the waitresses wearing little black dresses and red stilettos carting trays of drinks and cocaine on their shoulders, with no intention of going to the bathroom. All I needed was point five seconds away from the shitshow that was my life, which was why I headed straight to the massive floor-to-ceiling window of the Beverly Hills mansion.

The lights of Los Angeles glittered below like tiny jewels strewn across sand, and for the first time in my life, I would have given anything to be back in that valley where life was somewhat sane.

Placing my palm and forehead to the cool glass, I wondered how much longer I could hold onto this speeding car before I either had to let go or inevitably wound up in some horrific, fiery crash?

â€œChampagne?â€ One of the waitresses halted beside me. The glasses on her tray clinked together.

I could have downed every drink on that silver platter, and it still wouldnâ€™t have been enough alcohol to make that party bearable, but I snagged a flute of champagne anyway. The strand of effervescent bubbles danced along the curved glass. After two sips, I turned around.

Women had congregated around Spencer and Jag, staring, swooning. Touching. And both guys seemed oblivious to it all.

Three selfies in, Spencerâ€™s gaze landed on me, and I quickly looked away, focusing instead on one of the black and white prints of Jagâ€™s naked girlfriend that decorated the walls. I downed my drink, and turned back to gaze out the window.

Our gazes locked on our reflection in the window. â€œI told you I didnâ€™t want to come.â€

â€œItâ€™s not good to stay cooped up in the house.â€ Another kiss and his hands slid to my hips. â€œThat dress looks good on you.â€ His warm breathed fanned across my throat.

As mad as I was, as empty as I felt from what we had lost, my body reacted to his touch. Like a woman stranded in the desert, I was thirsty for his affection. For his touch. And I gave in for a moment, tilting my head to the side in the hopes the path of his lips would continue farther.

â€œItâ€™s just hard.â€ I swallowed and fought the anxiety winding through my chest. â€œSmiling when thereâ€™s still a gaping wound.â€

â€œI know.â€ His soft lips pressed below my ear. â€œWe can go if you want.â€

God, how I wanted to go, but before I could answer, one of the labelâ€™s assistants grabbed Spencer by the elbow. â€œI need to steal him. Just for a moment.â€ She grinned at me. Her collagen-plumped injected cheeks inflated like balloons. I just wanted to take something and pop them.

Spencerâ€™s arm untangled from my waist. He took a thoughtless step away before moving back to give me a quick kissâ€”as if I were an afterthought. The taste of whiskey and mint lingered on my lips. And just like that, we were no longer leaving, and the last bit of hope Iâ€™d desperately clung to frayed and snapped like the thread of a well-worn sweater.

Halfway across the room, the assistant grabbed Jag and led him and Spencer to group of giggling, star-struck girls in the corner of the room.

I took a deep breath.

The temptation to take the glass in my hand, smash it on the floor, and cause a scene fit for daytime television was strong. After all, when in Rome. . .

A boney elbow nudged my side. I pushed the emotions down where they belonged. Unnaturally round boobs spilled out of a low-cut, sequin dress. Iâ€™d seen Jagâ€™s girlfriend a handful of times, but River and I had never spoken. She flicked her white-blonde hair over her shoulder. â€œYouâ€™re Spencerâ€™s chick, right?â€

I watched both Jag and Spencer scrawl their signatures over the chest of a busty redhead. â€œSomething like that,â€ I said, my pulse ticking up by the second.

Riverâ€™s gaze strayed across the room just as Jag pretended to motorboat the redhead for a picture. Spencer stood beside him, his gaze aimed at the floor.

River sighed. â€œItâ€™s part of it, you know. Hollywood girlfriend 101: grin and bare it. The tabloids love to make us out to be jealous, raging psychos.â€ She laughed, then patted my back. â€œJust know, the first time he cheats, he doesnâ€™t mean it. It all kinda goes to their heads. Heâ€™ll get high or drunk or both, and end up backstage with some girl who just wants to suck his dick. One thing leads to another. . . Itâ€™s impossible to avoid, really.â€

The sad truth was, from what Iâ€™d seen, most of these guys were unfaithful. But Spencer was not most of these guys. . .was he? â€œIâ€™m not worried about the girls,â€ I said, sounding more certain than I felt. â€œWeâ€™ve been together since we were teenagers.â€

â€œOh, sweetheart.â€ The smile of pity she gave me caused my stomach to twist. â€œMaybe the guy he was before wouldnâ€™t have cheated, but heâ€™ll never be that guy again. Trust me. Iâ€™m three years in on the fame train. You just have to decide what you can manage.â€

Jag strutted past, full of swagger in his leather pants and messy, jet-black hair, with one arm wrapped around a barely legal girlâ€™s waist. His hand crept toward her ass, and he didnâ€™t even glance at River. My gaze swung to the opposite side of the room where Spencer took selfies with a revolving door of girls.

I swallowed. â€œAnd what did you decide you could manage?â€

â€œOh. You know.â€ River dug a pharmacy bottle from the glitter-covered clutch in her hand. One tap. Two. A few cylindrical, blue pills fell into her palm. She offered me one, but I shook my head. After tossing them into her mouth, she snagged a glass of champagne from a nearby table and downed them.

â€œItâ€™s give and take.â€ She shrugged. â€œHe sleeps with a pretty blonde, I get a new Gucci bag.â€

Designer handbags in exchange for one-night stands? No way in hell.

â€œThink about it,â€ she said, snapping her clutch closed. â€œOur guys have thousandsâ€”millionsâ€”of women throwing themselves at them. How could you possibly expect them not to slip up once and a while? It just comes with the territory, honey.â€

That knot in my gut grew tighter and tighter.

â€œBut, the thing to remember, all those other girls,â€ she said, nodding to the women flocked around Spencer. â€œTheyâ€™re insignificant. Besides, gods donâ€™t play by the same rules as mere mortals, babe. And we are dating gods.â€

But I had never wanted a god. I only wanted Spencer. 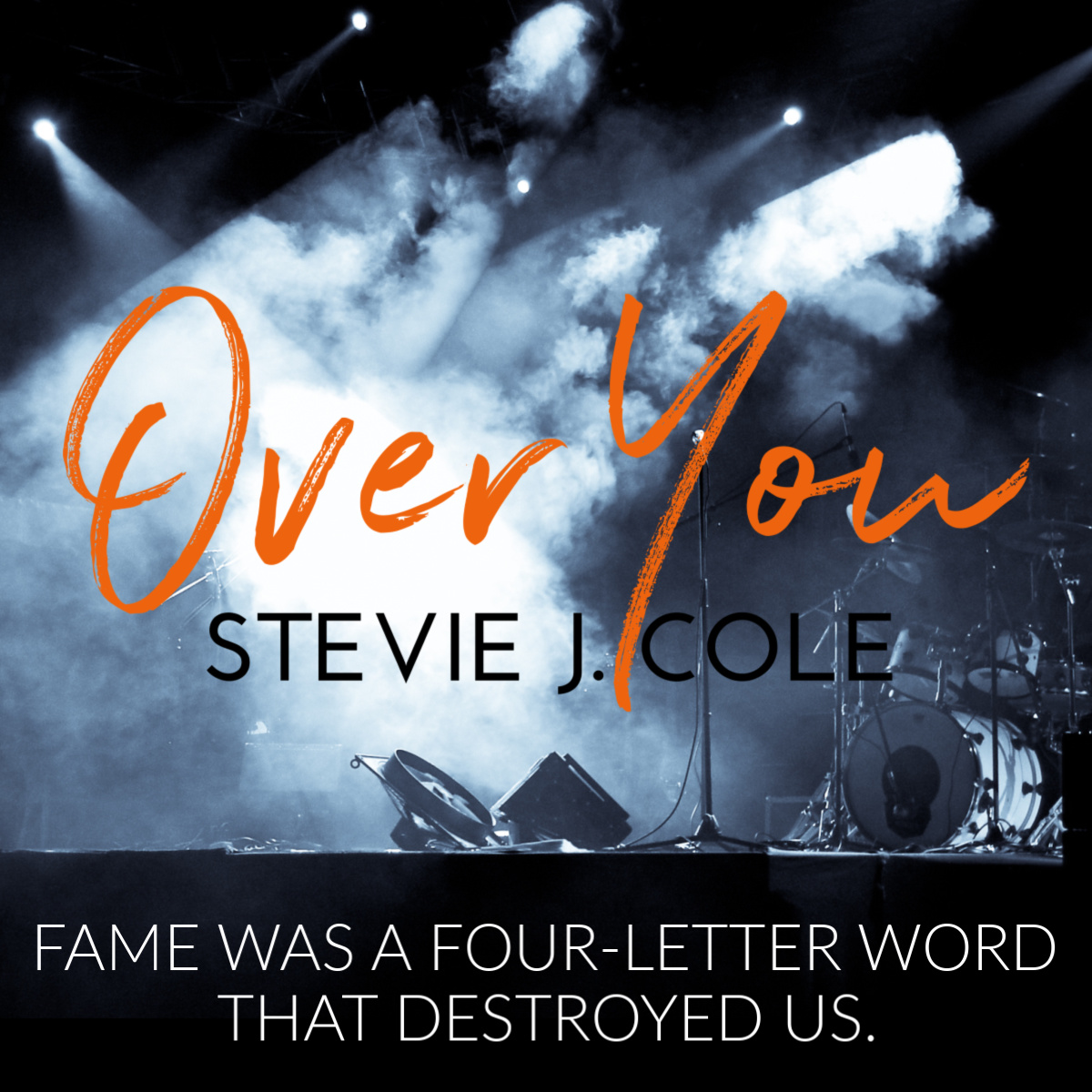 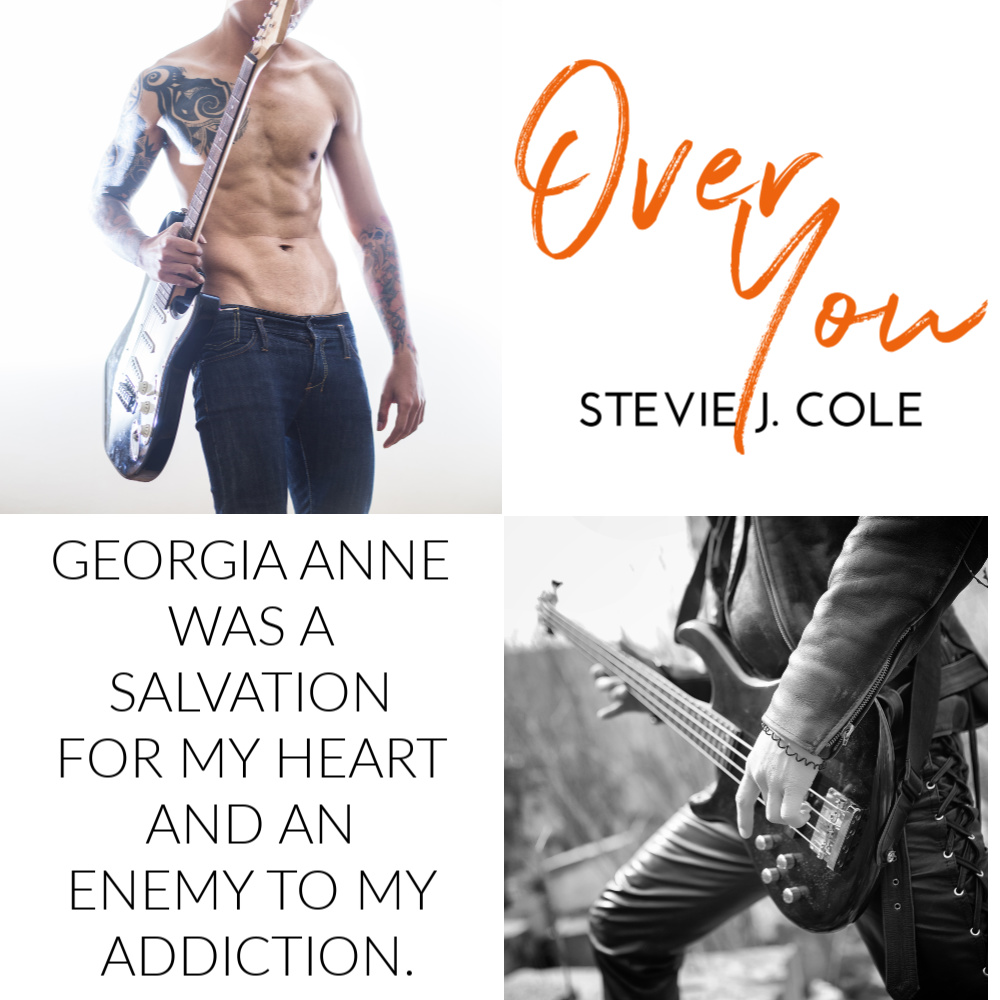 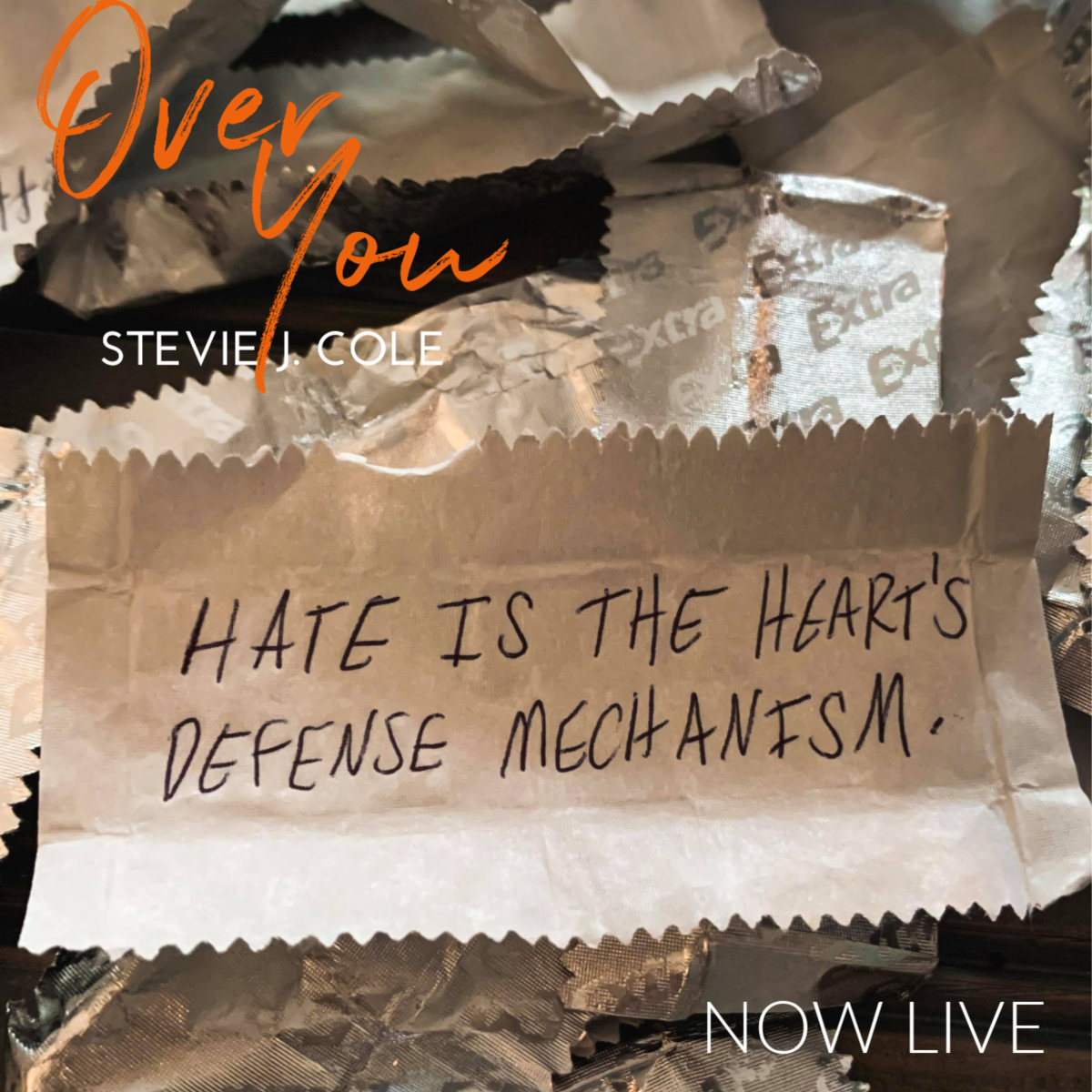 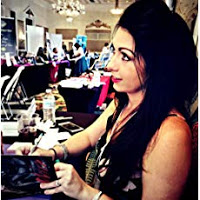 Sign up for Stevie’s newsletter to get SPECIAL offers and FREEBIES: http://eepurl.com/cSvrXn

About Stevie:
Stevie J. Cole lives deep in the woods of Alabama with her sexy hubs and two precious daughters. She has an obsession with penguins and English chocolate and is terrified of clowns.

Her solo books offer you all the feels you’ve come to love in a warm, pretty romance with happily ever afters, while her co-authored books with LP Lovell take you on a thrilling ride of suspense and danger with a nice little kick of love.