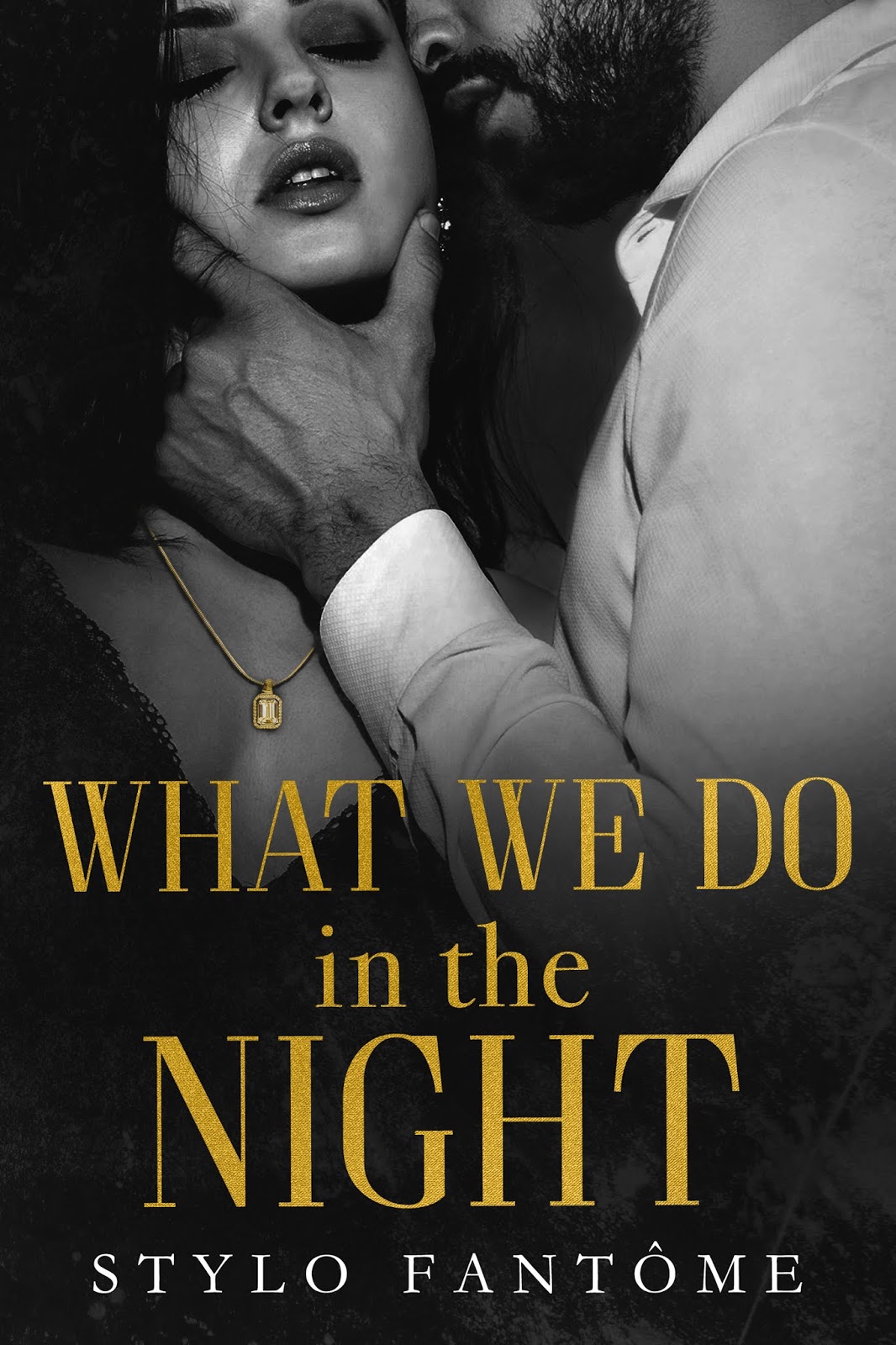 Just five months ago, Valentine O’Dell started working at a very special kind of nightclub â€“ one where you can dance the night away, or live out your greatest fantasy. She’s learned to lose herself to her nights, forgetting all her day time woes as she charms every man she meets. It’s easy enough to do when she doesn’t let her feelings get involved.

Then Ari Sharapova walks in and changes everything.

Working for his father’s law firm has left Ari with very little control over his life, so when he sees Valentine for the first time, he sees a girl who is desperate for someone to take care of her. To take over her. So what he can’t get for himself in the day time, he’ll simply take for himself at night. But when power struggles lead to real feelings, who’s actually controlling whom?

Some relationships are better left in the dark. 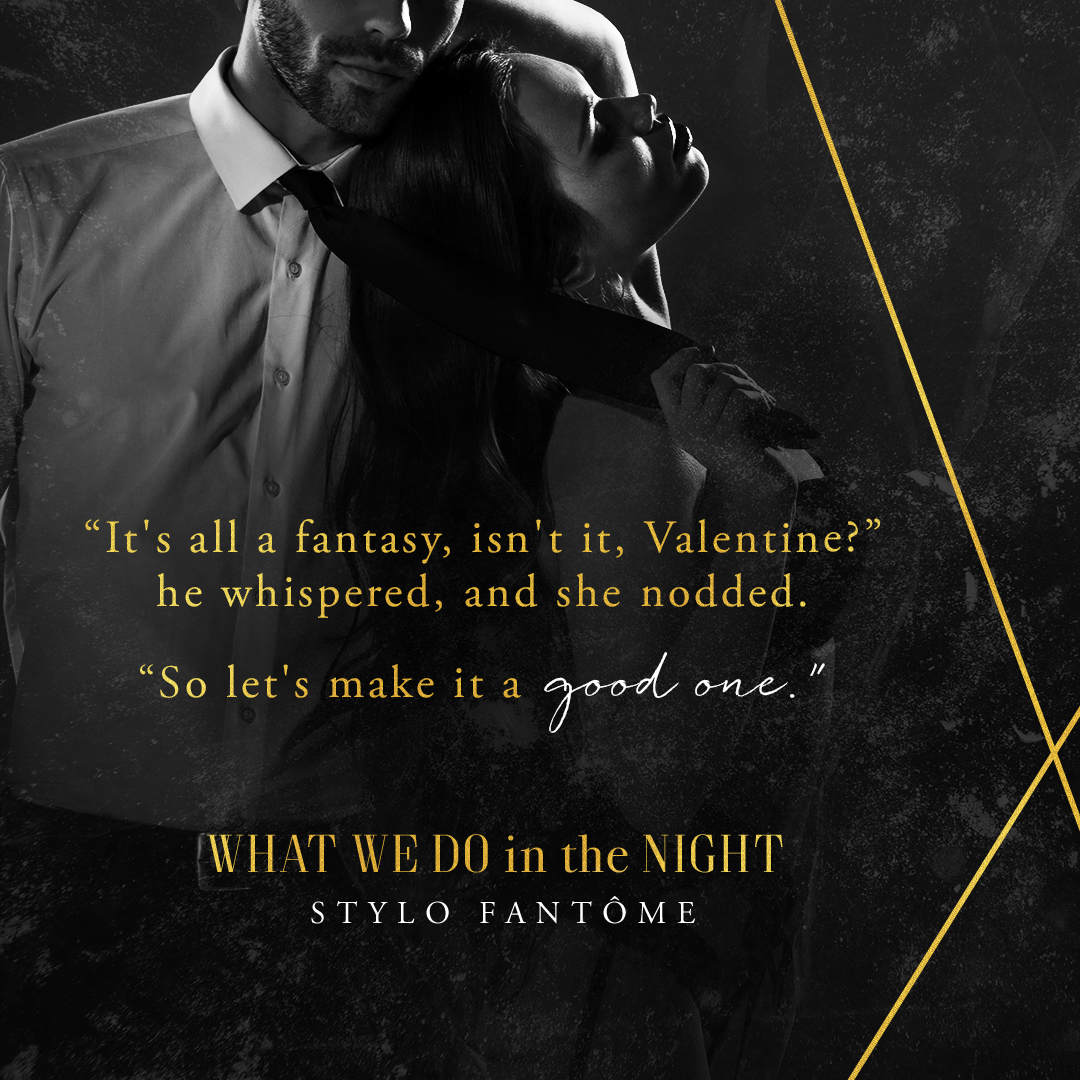 When Valentine got to the ladies room, she all but fell through the door. A bathroom attendant jumped out of her chair, asking if she was alright.
â€œI’m fine,â€ she groaned. â€œJust bumped into a blonde nightmare.â€
â€œOh,â€ the attendant laughed. â€œOne of those, huh?â€
â€œRich people are the worst,â€ Val growled, moving to lean against a sink. â€œYou know? They just think they can talk to you however they want. Screw them.â€
â€œI couldn’t agree more.â€
She was ready to go off on another tangent, but then the door burst open once again. Ari strode into the room, startling both of them.
â€œSir, this is the -â€ the attendant started.
â€œLeave,â€ he ordered her, though his eyes never left Valentine’s.
The attendant looked unsure for a moment. Val rolled her eyes, but she eventually nodded her head, signaling that it was okay. The attendant nodded back, then demurely left the room.
â€œA little dramatic,â€ Val said once the door had shut.
â€œWhat the fuck do you think you’re doing?â€ he demanded.
She belatedly realized he was angry. Ari was very, very angry. She glanced around the room.
â€œWell, I was gonna pee â€“ I thought this was the best place to do it,â€ she tried to joke. His glare grew even more severe and he loomed over her.
â€œWhat are you doing here? At this restaurant? With that piece of shit out there?â€ he clarified. Her jaw dropped.
â€œUh, excuse me, I think you’ll find that your ex is the only piece of shit here,â€ she informed him. â€œYou should’ve told her not to come where she isn’t wanted.â€
â€œDon’t you ever tell me what to do. Now explain yourself.â€
â€œExplain myself?â€ Valentine laughed loudly and stepped away from the sink, not wanting him to have the power position of leaning over her. â€œExcuse me, but I’m not your girlfriend. I don’t have to explain anything to you.â€
â€œNo, you’re my property, and as such there are rules you must abide by,â€ he growled. â€œRules we both agreed upon.â€
So much of what he’d just said was messed up, but she decided to save most of it for later and tackle what exactly it was that had him so pissed off right now.
â€œThat’s why you’re upset?â€ she asked. â€œBecause of the guy I’m having dinner with? Because of Ralph?â€
â€œI’m upset because you’re breaking the rules. I paid a lot of money for you â€“ I won’t tolerate insubordination.â€
â€œYou paid a lot of money for my time,â€ Val corrected him. â€œSo screw you, Ari, I’m not breaking shit.â€
â€œI told you in the beginning,â€ he started. â€œNo other ‘clients’ â€“ no picking anyone else up at your club. And I don’t believe for one second you met Ralph out there on Tinder, or at the laundromat, or at school, or wherever, so he must be a client. What the fuck.â€
Oh my god, he’s jealous. Jeez, you fuck a guy a couple times and suddenly he thinks he owns you.
Yet still, somewhere deep down in her chest, her heart began to beat faster.
â€œYes, he’s a client,â€ Val snapped. â€œBut I didn’t break any rules. I agreed to a dinner date with him before I met you, it’s been set up for weeks now, I’m just fulfilling a deal. My world doesn’t revolve around you, Ari.â€
â€œIt had better fucking start to.â€
â€œAre you kidding?â€ she asked. â€œYou’re mad? How do you think I feel, seeing you here with friends and not being able to acknowledge you, and then having your evil ex talk to me like that, like she’s still with you?â€
â€œDeal with it â€“ you knew what you were signing up for.â€
Val was pretty sure steam was about to shoot out of her ears.
â€œI signed up to give you exclusive rights to my time,â€ she growled. â€œNot to be verbally abused by your bitchy ex-girlfriend, and not to be treated like some contractually obligated whore.â€
â€œIf the contract fits.â€
Valentine slapped him before she could stop herself, shocking both of them.
â€œDon’t you ever talk to me like that again!â€ she hissed. Ari stared down at her, his blue eyes ablaze with anger, that errant lock of hair falling across his forehead once again.
â€œI’ll talk to you however I want. Don’t ever fucking hit me again.â€
She let out a frustrated shriek, then she slapped him again before pounding her hands against his chest. He struggled to grab hold of her arms, shoving her across the room and slamming her up against the wall by the door. He pinned her wrists near her head, then they glared at each other, both their chests heaving, both their hearts raging.
He’s the worst.
She was suddenly kissing him. Or he was kissing her. It was impossible to tell â€“ they were no longer two separate entities. He let go of her wrists and she immediately started clawing at the front of his blazer, trying to pull it apart. His left hand went around her throat, gently squeezing, while his right hand went to her exposed thigh, rubbing the outside of it.
â€œThis dress,â€ Ari gasped against her. â€œJesus, when I saw it â€¦â€
â€œWhen I put it on tonight, I thought of you,â€ Valentine spoke quickly, finally undoing the button and pushing her hands inside his jacket.
â€œI want to fucking rip it off of you.â€
â€œGod, yes, I want that, too,â€ she groaned, dragging her nails down his back, wishing her hands were against his skin.
Then his tongue was back between her lips, just as aggressive as always. He didn’t just take a taste when he kissed â€“ Ari made a whole meal of her mouth, and she loved being devoured. 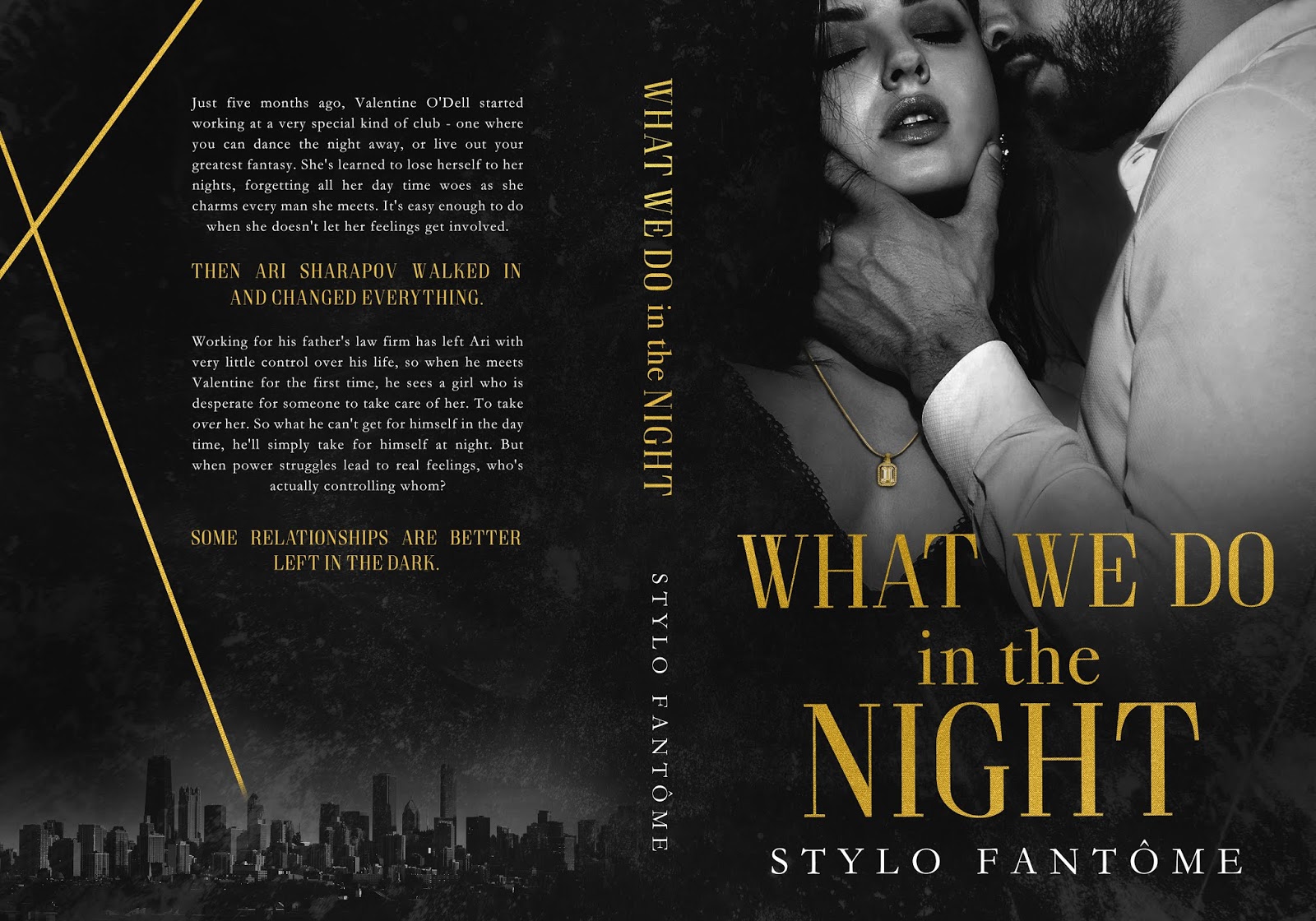 Crazy woman from a remote location in Alaska (where the need for a creative mind is a necessity!), I have been writing since … forever? Yeah, that sounds about right. I have been told that I remind people of Lucille Ball – I also see shades of Jennifer Saunders, and Denis Leary. So basically, I laugh a lot, I’m clumsy a lot, and I say the F-word A LOT.

I like dogs more than I like most people, and I don’t trust anyone who doesn’t drink. No, I do not live in an igloo, and no, the sun does not set for six months out of the year, there’s your Alaska lesson for the day. I have mermaid hair – both a curse and a blessing – and most of the time I talk so fast, even I can’t understand me.

Yeah. I think that about sums me up. 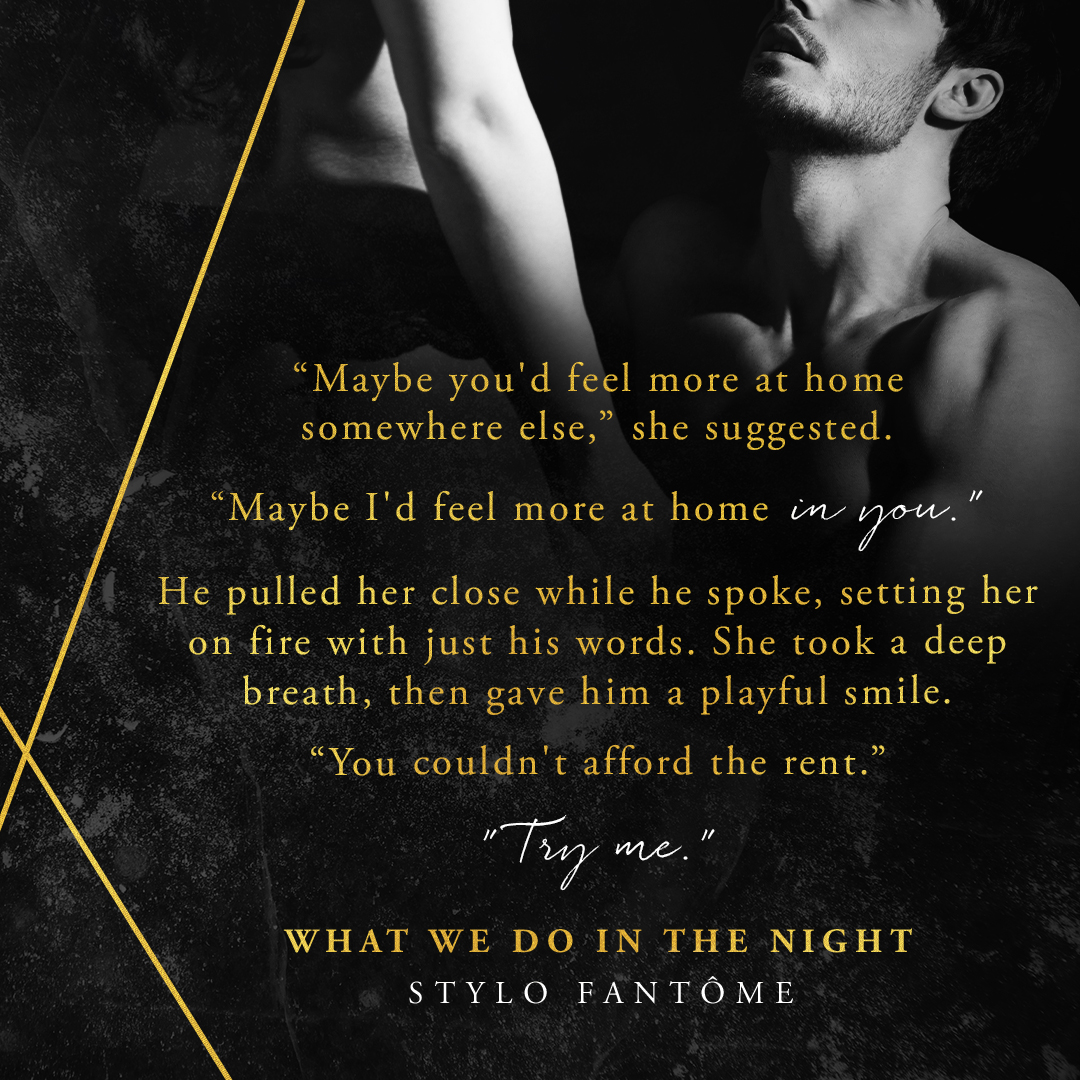