New York Times bestselling author Aleatha Romig brings you Bound, the dramatic conclusion to her brand-new dark romance set in the same dangerous underworld as Secrets. You do not need to read the Web of Sin trilogy to get caught up in this highly acclaimed intriguing saga, Tangled Web.

With danger lurking around every corner and my life turned upside down, I struggle with who to believe and who to trust.

Can my heart convince my mind that what was bound long ago is where I’ll find love, safety, and security?

Or are the memories simply an illusion?

BOUND is book three of the TANGLED WEB trilogy 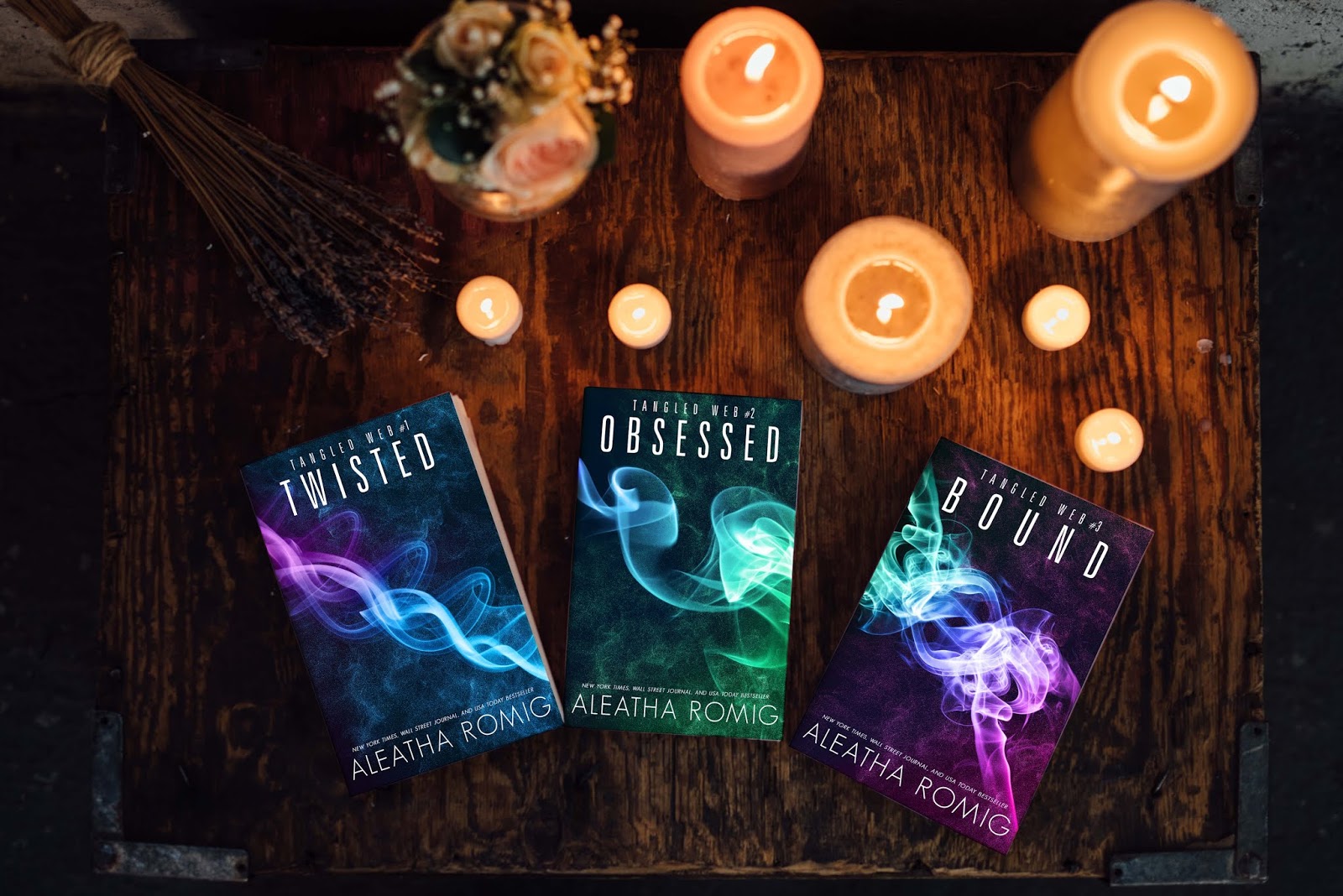 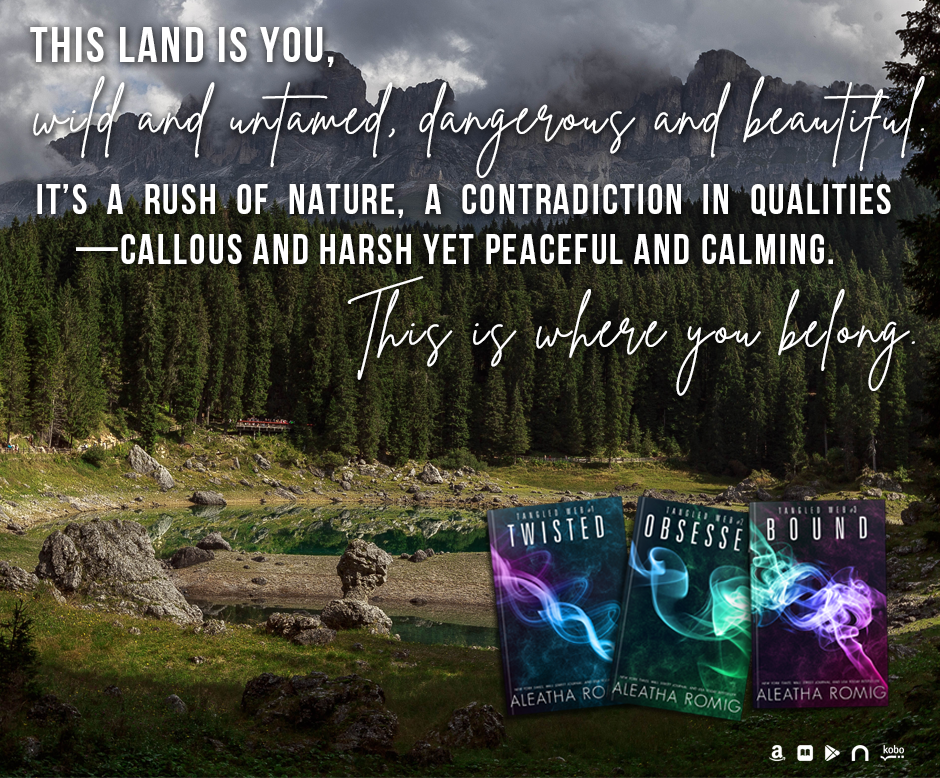 Start from the beginning of the Tangled Web Trilogy with Twisted!

The underworld of Chicago is far from forgiving. It’s a world where knowledge means power, power money, and money everything.
While I paid the ultimate price to have it all, it wasn’t my decision to give up my life.
That doesn’t mean I ceased to exist, only to live.
Going where the job takes me and living in the shadows, with deadly accuracy I utilize the skills inherent to me, not knowing from where they came, not recalling what I’d lost. 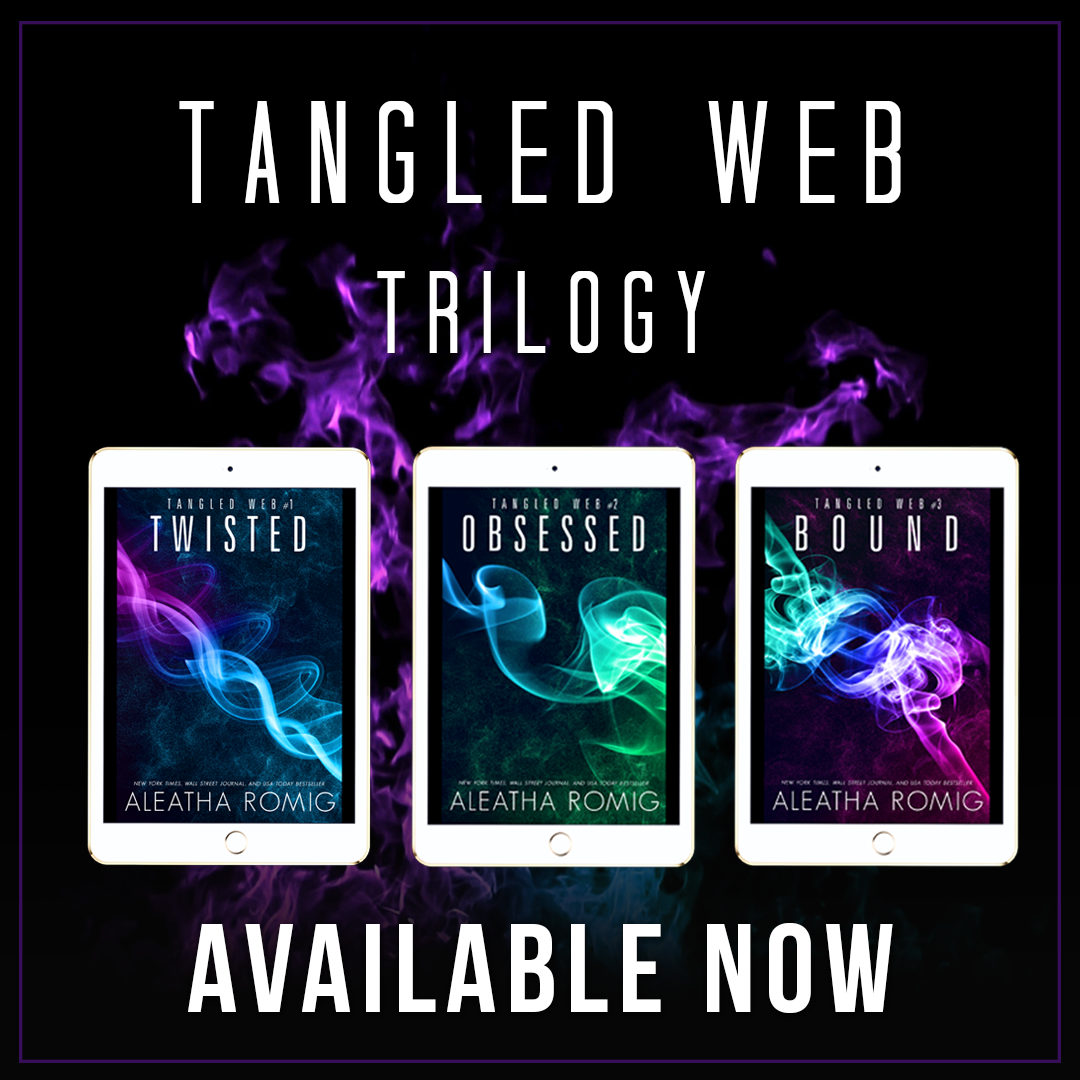 And then I saw her.
Laurel Carlson.
I shouldn’t want her, desire her, or need her, yet with each sighting I know she is exactly what I have to have. Laurel has the ability to do what I thought was impossible. She sees what others don’t.
My gut tells me that it’s a deadly mistake to change my plans and open my world to her. My mind says she’ll be repulsed by my twisted existence.
None of that matters, because my body won’t take no for an answer.
I’ve made dangerous mistakes before.
This time, will the price be too high? 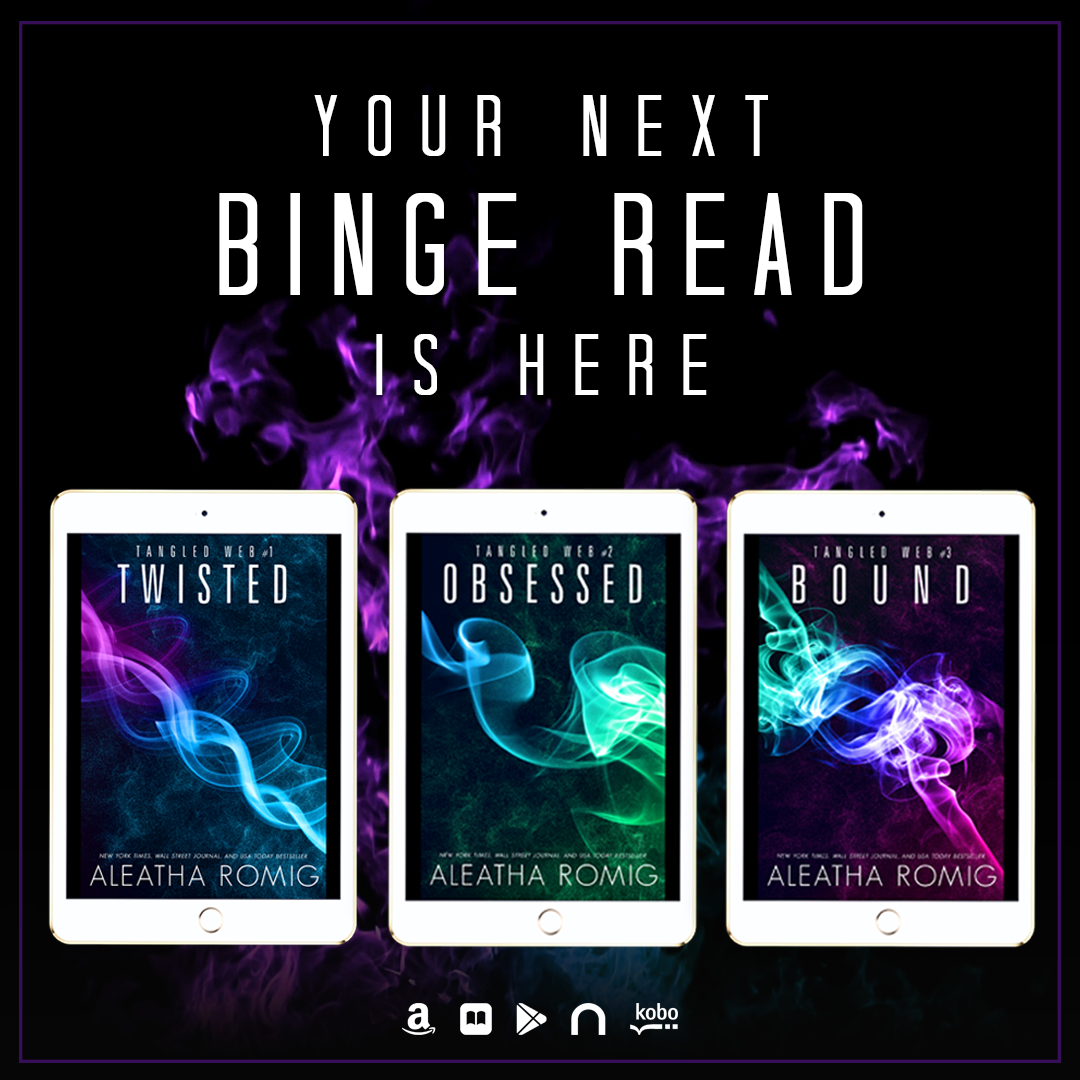 Obsessed is book two of the TANGLED WEB trilogy which began with TWISTED and will conclude in BOUND.

Everything changed the night our eyes met across the room. His green gaze upon me prickled my skin with uncustomary warmth while my peek beneath his cuff–of a riot of color on his wrist–sparked my insatiable curiosity. Tall and mysterious, Kader was a man who secrets I longed to know.

Little did I realize that the night we met was only the beginning–the beginning to the end of the existence that I knew.

What will happen as his assignment becomes our obsession? 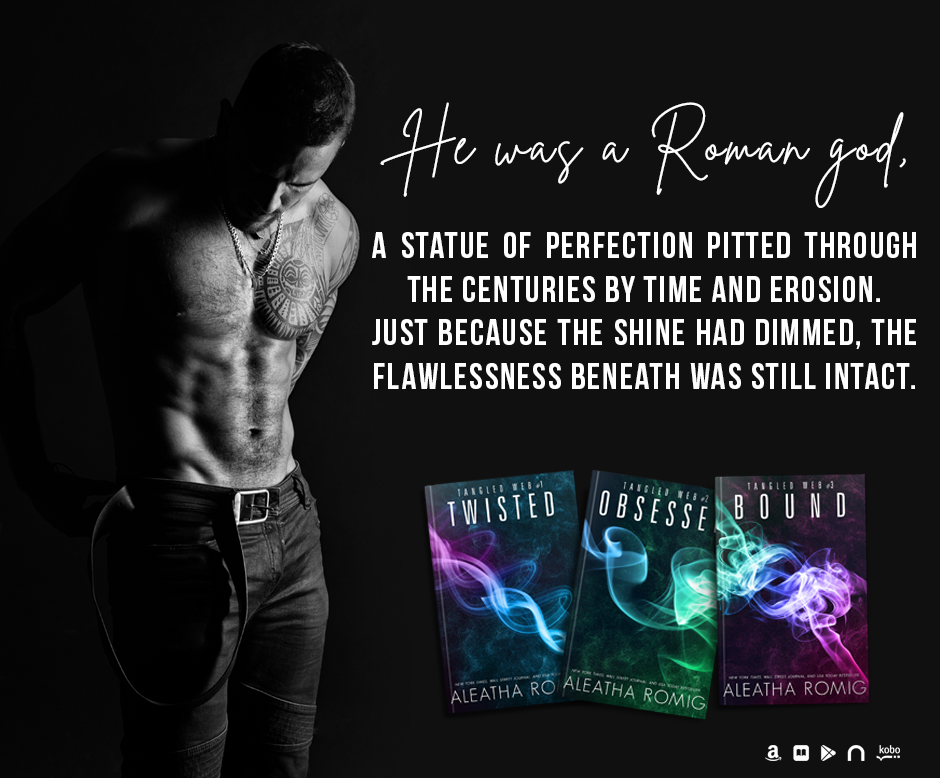 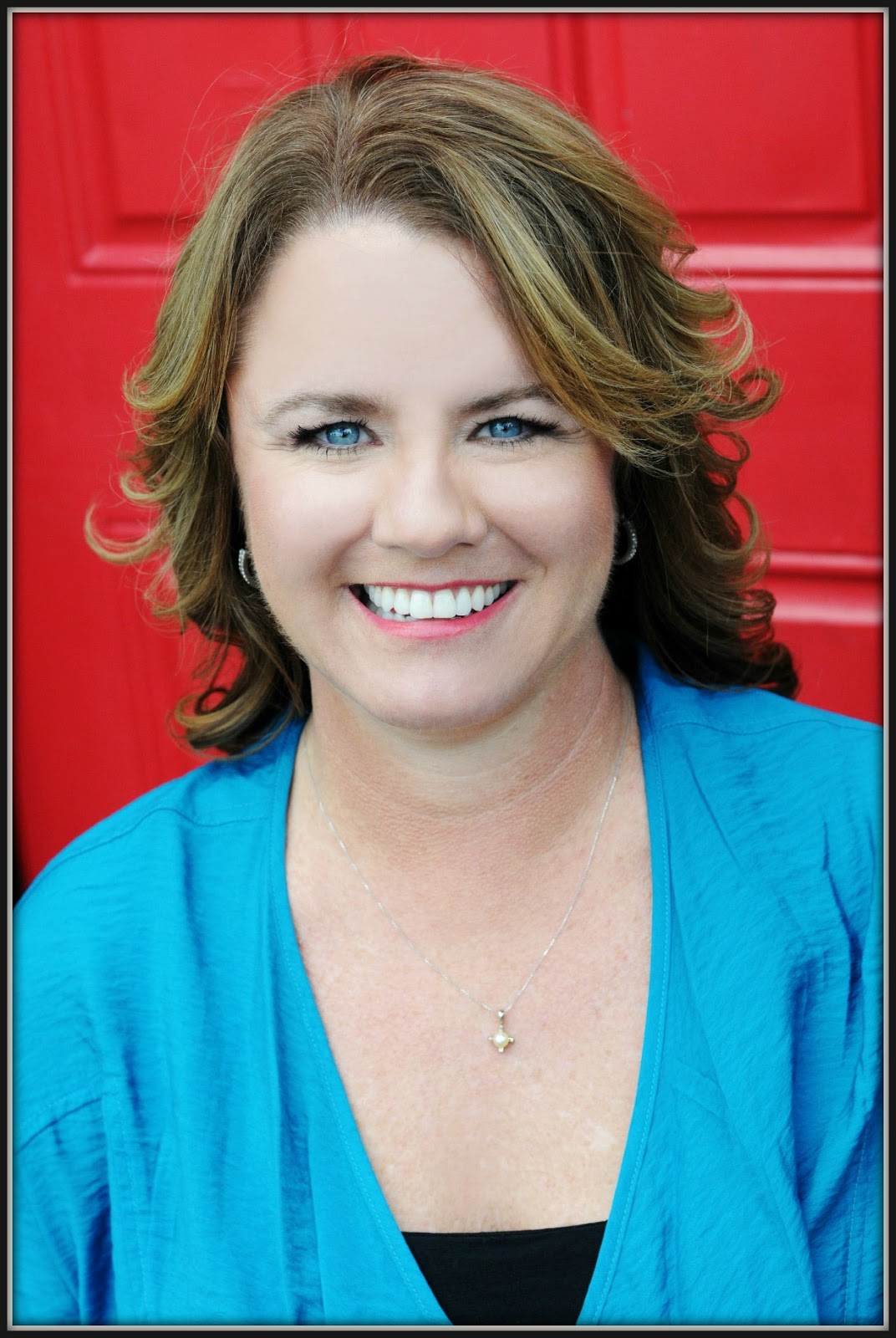 Aleatha Romig is a New York Times, Wall Street Journal, and USA Today bestselling author who lives in Indiana, USA. She grew up in Mishawaka, graduated from Indiana University, and is currently living south of Indianapolis. Aleatha has raised three children with her high school sweetheart and husband of over thirty years. Before she became a full-time author, she worked days as a dental hygienist and spent her nights writing. Now, when she’s not imagining mind-blowing twists and turns, she likes to spend her time with her family and friends. Her other pastimes include reading and creating heroes/anti-heroes who haunt your dreams and bring your imagination to life!

Aleatha released her first novel, CONSEQUENCES, in August of 2011. CONSEQUENCES became a bestselling series with five novels and two companions released from 2011 through 2015. The compelling and epic story of Anthony and Clair Rawlings has graced more than half a million e-readers. Aleatha released the first of her series TALES FROM THE DARK SIDE, INSIDIOUS, in the fall of 2014. These stand alone thrillers continue Aleatha’s twisted style with an increase in heat.

In the fall of 2015, Aleatha moved head first into the world of dark romantic suspense with the release of BETRAYAL, the first of her novel INFIDELITY series that has taken the reading world by storm. She also began her traditional publishing career with Thomas and Mercer. Her books INTO THE LIGHT and AWAY FROM THE DARK were published through this mystery/thriller publisher in 2016.

In the spring of 2017, Aleatha released her first stand-alone, fun, and sexy romantic comedy PLUS ONE, followed by the sweet stand-alone, ONE NIGHT.

Aleatha is a “Published Author’s Network” member of the Romance Writers of America and PEN America. She represented by Kevan Lyon of Marsal Lyon Literary Agency.