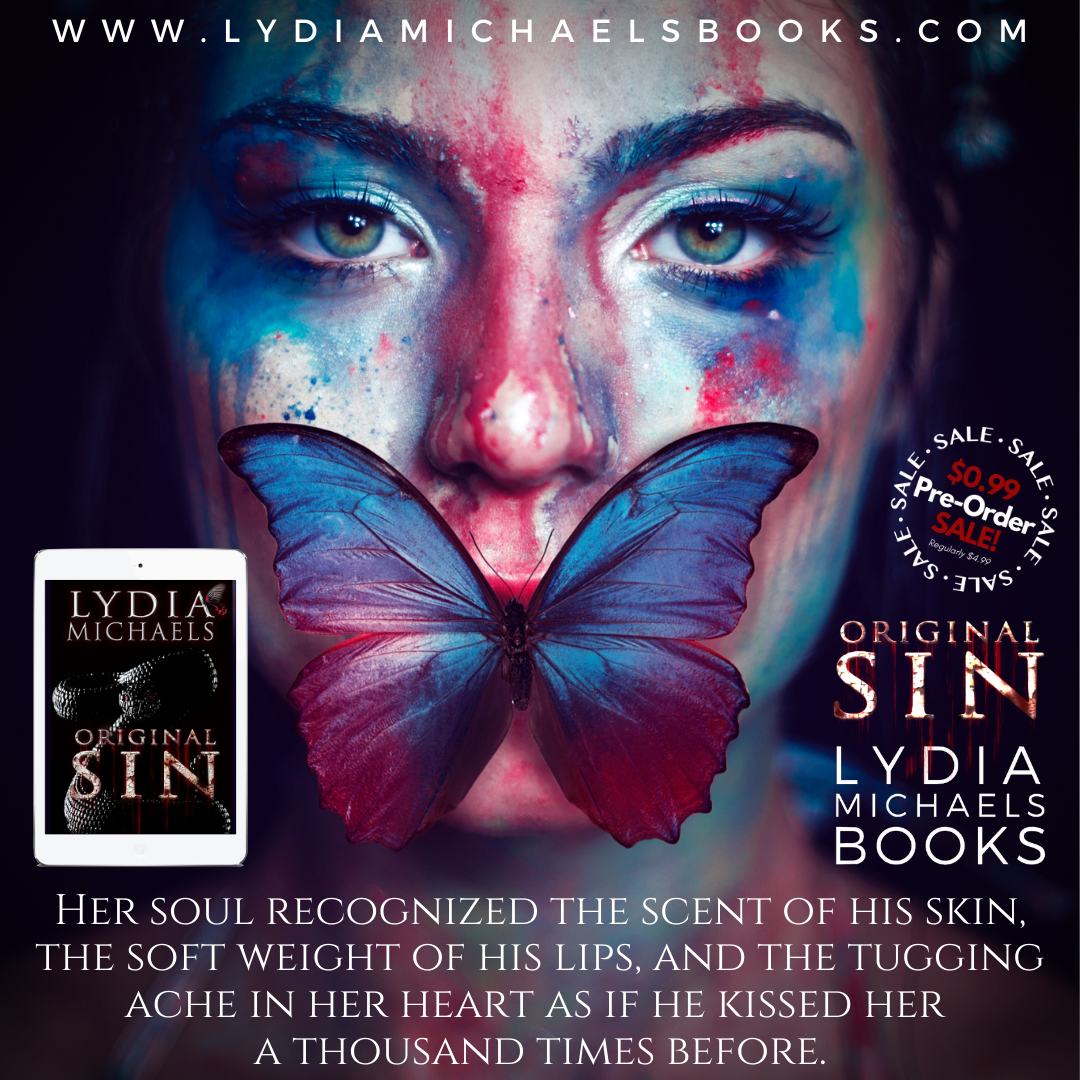 A sneak peek inside Lydia Michaels’ upcoming release, ORIGINAL SIN, which drops May 12, 2020!

What Readers Are Saying…
“HAIL TO THE NEW DEVASTATINGLY DELICIOUS SERIES THAT’S GONNA BE THE NEW TRENDING VAMPIRES!!
WOW. Feeling so overwhelmed and full of so many emotions, as if I was the one that just travelled to another world!” ~GOODREADS REVIEWER

ORIGINAL SIN (The Order of Vampires #1) by Lydia Michaels 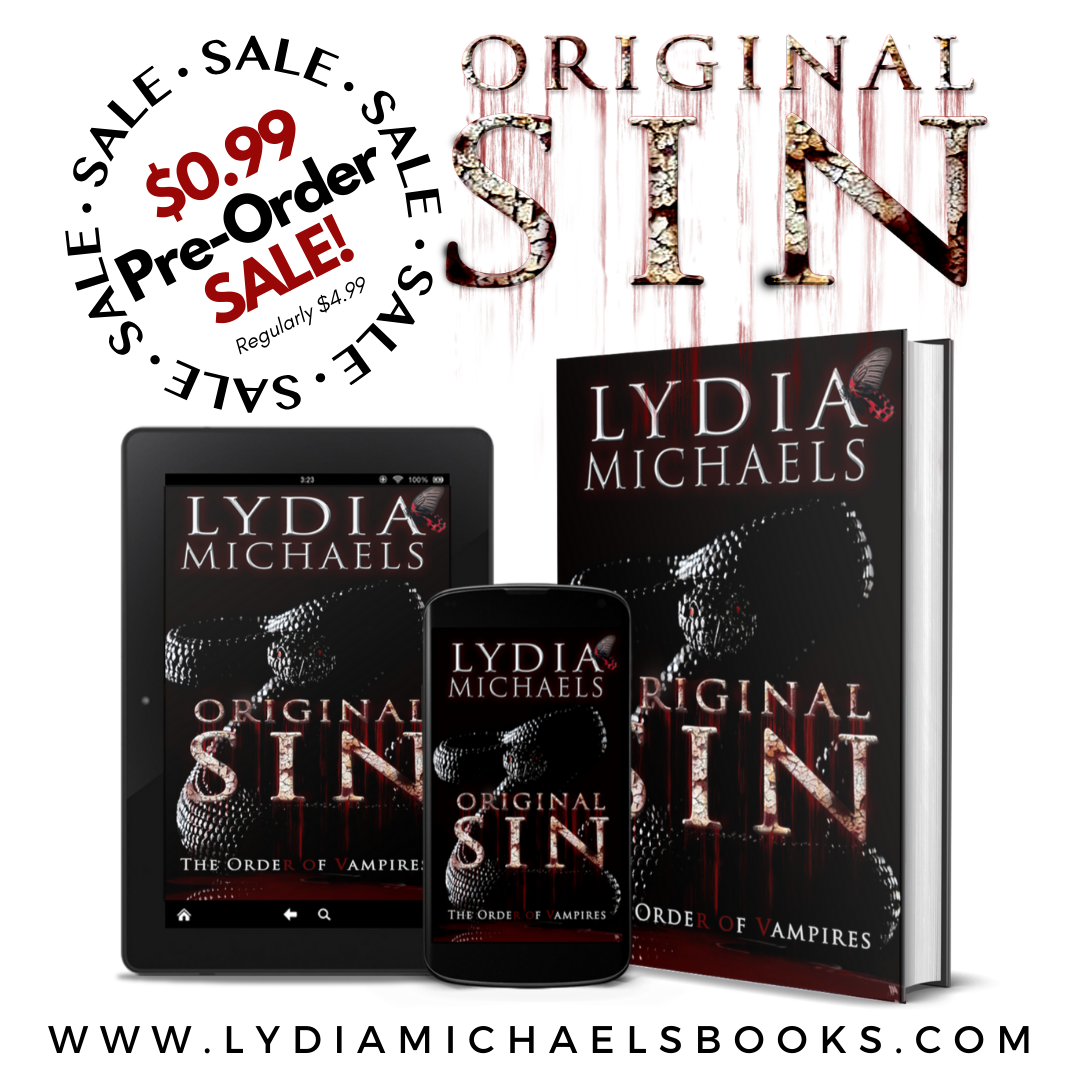 Lifting a towel from the basket in the corner, he shut his eyes and inhaled, pressing
the fabric to his nose. His body instantly hardened, his instincts driving him
to her bed where she slept soundly.

She lay in the center of the bed, dwarfed by the large mattress. Her limbs twisted in the white sheet. Waves of copper and gold splayed across the pillow. So still. So
delicate. So … his.

Satisfied with God’s selection, he studied his prize. His salvation. His future. His
beautiful Annalise.

Hooking a finger into the sheet, he slowly drew the blanket toward the foot of the bed. A simple undershirt, covering little more than her breasts, gave a transparent
picture of her curves.

Narrow ribs tapered into a tiny waist he’d be able to span with his hands. Her hips flared, as a healthy woman’s should. His head cocked as the sheet fell to the side, exposing her legs. A wisp of material, too small to be considered a garment, covered her sex.

“What evil is this?”

He inhaled deeply, wondering at the strange covering. Females of the order wore handmade undergarments, loosely fitting with ties. The men wore nothing under their clothes. But this…

Lowering to the bed, he sat gingerly beside her hip and studied her. The overwhelming need to touch her, mark her, stole through him hard and fast, leaving all other instincts second.

He wanted to feed from her vein as his body throbbed inside of hers, filling her
with his seed. He wanted to possess every part of her—mind, body, and soul.

Unlocking his fists, he traced the back of his finger along the soft white expanse of her thigh. Goosebumps prickled her flesh, and a small moan escaped her throat.

“You will know my touch and feel it often.”

Drawing slow whirls over her hip, his fingertip treaded lightly across the elastic of
her minimal undergarment. Her skin showed like ivory in the moonlight. Silver pools of blue painted her pale skin. She was a masterpiece. Hard points formed under her shirt as he dragged his exploring finger up her arm. He ached to trace his touch over the turgid tip but refrained.

A soft moan slipped past her plump lips and her legs shifted, her hips burrowing into
the mattress. Could she sense his desire?

His need to touch and possess her left him shaken. Withdrawing his caress, his gaze traveled over her torso. Each breath expanded her ribs and lifted her breasts.
His inspection climbed the narrow column of her throat and stilled at her fluttering pulse.

Arousal slammed into him. A bone deep hunger ached inside of him, begging him to claim her. His tongue traced under his fangs as he leaned closer, breathing in her delicate fragrance, feeding off the scent of such a vulnerable offering. So small. So fragile. So in need of a mate. His jaw widened—

He sprang off the bed, startled by the powerful trance she held over him. It was as if she had him under some sort of spell.

Forking a hand through his hair, he paced silently. He wanted her now, consequences be damned. How long would he have to wait? Would it really matter? Their futures were decided. Why not now?

Battling with his conscience, he crouched at the foot of the bed, his greedy stare
traveling up her legs. His thumb dragged along the inside of her ankle, gliding
upward to her knee and pulling her legs apart. Her scent intensified.

Closing his eyes, he breathed her in. This was his mate, his one and only, his ainsicht.

The beat of her heart seemed to complement his, like the tease and retreat of the
ocean waves beating back the banks of the shore. The rush of blood pumping
through her veins rattled his concentration. It sung to him, a siren’s call
that compelled an answer.

His skin burned like the tongues of a fire, licking at his insides, his burning
desires heating his blood to volcanic degrees. He needed to leave. Now.

Taut as a bow, he forced himself away from the bed for her protection. Never had he
fought such temptation. Carnal images assaulted him. Her body clinging to his, flesh
gliding over flesh. Nails digging into muscle. Fangs piercing skin.

His cock throbbed, pleading that he take her and claim what was rightfully his. Heart
hammering against his ribs, he staggered back from the bed. His control was
slipping. If he touched her now, he’d break her.