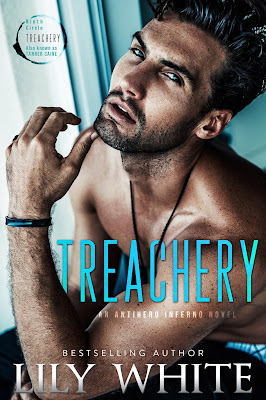 Ninth Circle.
Treachery.
Also known as Tanner Caine.
He is a temptation with cold, dark eyes.
A man with a seductive smirk and a body built for pure sin.
The linchpin of a group of wealthy bad boys known as the Inferno.
A dark presence that repels as much as he attracts, Tanner is the poisoned apple I want to bite even when I know it will destroy me.
Our story started in college, but I ran from him so far I believed I was safe.
I should have known he’d find me eventually.
I should have known that nobody escapes.
He has me in his sights again with an offer I can’t pass up.
I know better than to make a deal with the Devil.
Not unless I’m willing to pay his sensual price…
(Treachery is Book One of the Antihero Inferno Series. Nine Standalone novels. Nine dangerous men. Nine unrepentant sinners you’ll hate to love.)

Some monsters are frightening because they kill and maim without remorse. Some are scary because they get in your head and make you doubt everything you believe you know about the world around you.
Tanner is terrifying because it takes nothing at all for him to set his sights on you, to ignite his anger and draw his attention. And instead of simply destroying you physically or mentally, he is the type of monster who will alter your entire world and leave you struggling to breathe while watching it all come tumbling down.
He leaves you alive to witness the chaos. He leaves you drowning while he storms off, satisfied that there isn’t so much as a shred of what you once had left for you to cling onto.
Maybe monster is the wrong word.
It’s too simple.
Too ordinary.
Other men are monsters.
Lesser men are monsters.
Not Tanner.
Tanner is a maelstrom.
He frightens me now even more than he had at Yale. I try to lie to myself and swear the fear has everything to do with the money I will lose.
But there’s something else, something deeper, something shadowed and burning with fierce carnal desire that lingers like a fog within my core.
Memories collide with the present, the aching I feel every time Tanner is nearby.
Because it hadn’t been easy to avoid him so many years ago.
It had been a fight, a war, a bloody battle occurring inside me.

My Review:  Lily White is a freaking genius, she has taken Dante’s Poem Inferno-the eight circles of hell to contrive a masterpiece series worthy of all the praise and accolades. The nine brothers from different mothers (except the twins) each represent one of the circles, Treachery is Tanner’s story. Tanner’s father is known as Daddy Dearest and the man is a ruthless SOB if we thought the games and deals were bad from the sons we only have to look to their fathers to see where it all originated. Some deals may be worth the risk, while others not so much but you don’t get to decide which ones you are going to forfeit and which are going to be played till death or total destruction. Luca Bailey never wanted to catch the eyes of the Inferno Brothers, but her best friend and college roommate Everly introduced her to them at a house party and her life has never been the same. The twists and turns will have you looking over your shoulder trying to absorb everything that is happening. #Excellent #wellwritten #totallyentertaining #mustread #Mayrelease #Lilywhite #mindblowing #ruthless #treachery #tannerandluca