Single mother Moira Bishop hates when her family interferes in her love life. If life as a young widow isn’t hard enough, just add three boys, a slew of unruly pets, and ownership of Gamble Alaska’s only diner. The last thing she needs is a man to look after too.
Entertainment lawyer to the stars Ethan Caplan hates his clients. There’s only so much coddling and placating a man can do in a lifetime. He’s finally decided he’s had enough, so he escapes to the tiny no-horse town of Gamble to work on the novel he’s always wanted to write.
Positive that Alaska will be distraction-free, Ethan’s sure he can pen a bestselling legal novel. That is until he lays his eyes on Moira Bishop. Suddenly he finds himself having five meals a day at the diner, just so he can talk to her for a few minutes.
When Moira’s son wins tickets to the Galaxy Studio Theme Park in L.A., Ethan jumps at the chance to play host to the family. He’s sure he can win her over by showing her how glamorous life could be with him. With the help of his friends, he plans the date to end all dates, hoping one incredible night will change her mind about giving love a second chance.
Will Moira open her heart to Ethan? Will Ethan do what it takes to prove that he can be the man Moira and her boys need in their lives? Will little Colton be tall enough to ride the Galactic Mindbender?
Find out in the deliciously fun second installment in the Gamble on Love Momcom series.
Grab Your Copy Here!
Free in KU 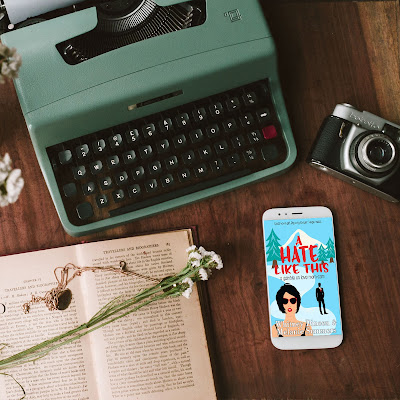 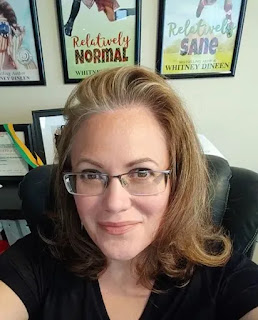 Whitney Dineen is a rock star in her own head. While delusional about her singing abilities, there’s been a plethora of validation that she’s a fairly decent author (AMAZING!!!).
After winning many writing awards and selling nearly a kabillion books (math may not be her forte, either), she’s decided to let the voices in her head say whatever they want (sorry, Mom). She also won a fourth-place ribbon in a fifth-grade swim meet in backstroke. So, there’s that.

Whitney loves to play with her kids (a.k.a. dazzle them with her amazing flossing abilities), bake stuff, eat stuff, and write books for people who “get” her. She thinks french fries are the perfect food and Mrs. Roper is her spirit animal.

To learn more about Whitney and her books, visit https://whitneydineen.com/ 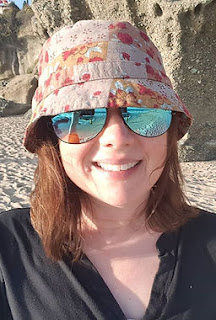 I got SUPER lucky and my first novel, Break in Two, a steamy contemporary romance cracked the Top 10 Paid on Amazon in both the UK and Canada, and the top 50 Paid in the USA. My Full Hearts Series was then picked up by both Piatkus Entice (a division of Hachette UK) and HarperCollins Canada.

My first three books have been translated into Czech and Slovak by EuroMedia. Since 2013, I’ve written and published sixteen novels and three novellas (and counting). I’ve sold over a quarter of a million books around the globe, and received two Bronze Medals at the Readers’ Favorite Award in the Chick Lit Category for The Royal Treatment (2018) and Whisked Away (2019), and one Silver Medal at the Readers’ Favorite Awards in the Women’s Fiction Category for The After Wife (2019).

Not bad for a newbie, eh?

I’m from Edmonton, Canada, where I live with my taller half, our three ‘spirited’ children (such a nice word to describe the chaos, no?). We also share our home with the cuddliest no-eyed dog ever, Lucy, and a furry Cuban dictator named Nelson. When I’m not writing, I love reading (obviously), snuggling up on the couch with the gang for movie night (which would not be complete without lots of popcorn and milkshakes), and long walks in the woods near my house.

I also spend a lot more time thinking about doing yoga than actually doing it, which is why any authorized photos of me are taken ‘from above’.

Oh, and I also love shutting down restaurants with my girlfriends. Well, not literally shutting them down, like calling the health inspector or something. More like just staying until they turn the lights off.

To learn more about Melanie and her books, visit https://www.melaniesummersbooks.com
Hosted By:

A Hate Like This is the second book in A Gamble on Love Mom Com. We first met Moria Bishop in No Ordinary Hate; she is Digger’s little sister, a widow with three young boys; Wyatt, age ten, and twins Colton and Ash, age seven. Moria’s husband Everett died in a boating accident when she was pregnant with the twins, and Wyatt was only three years old; she’s been alone even before he passed away, and now she thinks it may be nice to allow her heart to open to a new love.

Ethan Caplan is actress Harper Kennedy’s best friend. When she ran away to Alaska with her children while her ex was vacationing in Mexico with the nanny, Ethan was there for her, not because he’s an entertainment lawyer. After fifteen years of practicing law, he’s decided to take a sabbatical and write his novel. He believes that Alaska is the perfect place to write. Harper plays a matchmaker between her future sister-in-law and her best friend. Will Ethan and Moria date? Fall in love?

I’m a huge fan of Whitney Dineen’s outrageous stories, and together with Melanie Summers, their writing brings social issues to the forefront, making them emotional.